History of the breed

A powerful, vigorous, massive conformation, forming a whole rich in harmony and joyfulness.
Height: 70-80 cm for the male and 60-70 cm for the female.
The head is big, slightly curved in the parietal region, with a broad forehead including a slight medial depression.
The forehead communicates insensitively with the nasal cavities.
The nose is straight, slightly concave in the superior third and forms along with the forehead an obtuse and slightly perceptible angle.
The nose is not sharp and the muzzle in not very wide. The exterior wall of the superior jaw is not upright the nasal bone, but slightly inclined.
Perfectly positioned, powerful teeth. The tip of the nose is pigmented and the lips are moderately thick, strongly pigmented and close perfectly.
The ears are middle-sized and hang in the superior two thirds; they are slightly mobile and covered with long hair.
The eyes, positioned forwardly rather than laterally, have an intelligent and friendly look. They are almond-shaped, middle-sized and have the external angle higher than the internal one. The iris is pigmented even in the case of white-haired dogs.
The neck is very powerful, long enough and has no mane or necklace.
The thorax is long and deep, the ribs are nicely arched and the superior-inferior diameter outruns the elbow joint. The shoulder blade is long, brawny and oblique. The trunk is relatively long, large and straight. The loins are wide and strong, the croup slightly wry.
The tail is hairy, relatively long and oriented downwards. Its size is no bigger than 10 to 12 cm.
The hock is dry and well developed. The paws are big and strong, the soles are hard, short and strong claws, existent spur.
The hair is relatively soft, grey and shaggy. It has a fluffy aspect with slight irregular waves. The older the dog, the longer the hair.
The colour of the hair in the lateral parts is light grey and on the upper part of the trunk is with a darker hue. Other colors may be present such as: black, white and even spotted, but these come from breed -crossing, being inexistent with the pure-bred.
No short or gryphon hair is accepted.


This standard, starting with the presentation of the stop and its colours, describes the Romanian Shepherd dog. 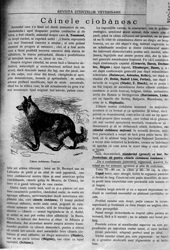 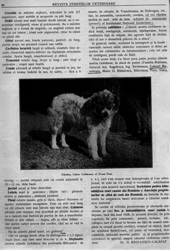 In Carpatii ( The Carpathians, a Romanian magazine), no.9, 15th of September, 1937, the dog expert Mihai Mosandrei, born in Bucharest on the 29th of January, 1986, whose father was a forestry expert educated in France and mother, Maria, from Campulung Muscel, publishes "A few words on the Carpathian dog". Mihai Mosandrei is the "father" of the Carpathian dog ; he gives this denomination to the grey, wolf-like dog.

This is a fragment of the article as it was published in 1936:

Don't ever forget that the bigger the dog, the duller it gets. Think of all those St Bernard's dogs or Terra-Nova. Somewhere, I mentioned that the Carpathian dog, as for its morphological character, could make a transition between the Eskimo dog and the Pyrenees one. By Pyrenees dog I understood the short variety rather than the tall dog whose height can reach sometimes even 80 cm. These dogs also called Patou, are slow and their movements have become slower as the height of the waist was more important. We shouldn't make the same mistake if it ever is to win a contest. The shepherd dog of the Carpathians is not that remarkable by his size as it is by the strength of his forms. 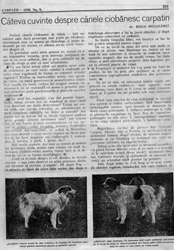 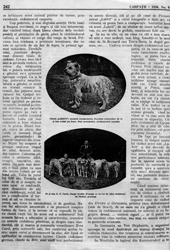 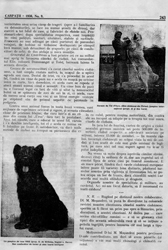 In 1937, in Carpatii , no 6, the National Livestock Institute sets the standard of the Romanian shepherd dog keeping the structure of that in 1934, describing the same wolf-like dog. This time, there is a new aspect involved that of the " trousers", typical of the Romanian Carpathian Shepherd dog:

The coat is long, thick, rough and sometimes the dog keeps its outer layer of fur, which has slight irregular waves that give it woolly appearance. The hair is longer and more abundant in the thigh region where it forms the typical trousers. Also, the hair in the tail is long and bushy.

In that same magazine number, Dr G Moldoveanu publishes an article The Romanian Shepherd Dog in which he draws up a theory of the Carpathian dog's origins:

The Shepherd dog is the result of subsequent cross-breedings between the common ancestor of the Bronze Age and a wolf of a bigger size which lived in the Northern regions of Europe.

In the same article we can find a touching description that, in my opinion, best describes the Carpathian dog: