History of the breed

The history of the Romanian Carpathian dog breed goes far back in time, when the first shepherds lived on the highlands of Romania, being an endemic breed.

Let the pen write down the history of this wonderful dog , the Carpathian dog, the facts and historical arguments in chronological order with their afferent explanations.

First of all, we must begin by a short question: Who are we? Definitely, we are one of the most ancient populations of shepherds in Europe. This is where Miorita ballad was born, a typically Romanian creation, unknown to the other peoples. The song was created in Transylvania on the basis of an initiation ritual and sung as a Christmas carol during the winter holidays. Gradually, it turned into a ballad (Southern and Eastern regions of the country) being considered a complete literary piece of writing from a stylistic point of view. Certainly, this essential occupation of the Romanian people, shepherding, could not be done without the dogs…not any type of dogs; they had to be perfectly adapted to the conditions in our country, but also to the specific features of the haughty Carpathians.

"He, the wealthier one,
Had more flocks to keep,
Handsome, long-horned sheep,
Horses, trained and sound,
And the fiercest hounds
...
Master, master, dear
Call a large hound near,
A fierce one and fearless,
Strong, loyal and peerless.
…
To let my bones lie,
Somewhere here, close by
By the sheepfold here
So my flocks are near,
Back of my hut's grounds
So I hear my hounds
…"(Source: The Internet)

The Shepherd dog, as seen in the above excerpt of Miorita ballad plays a special part in the poem, that of a shepherd's companion, but also that of a herd's protector. I believe that the millenary presence of the Shepherd dog on our territory is obvious.

Then, there comes the question: When is the interest for standardizing the Romanian Shepherd dog shown for the first time?

Ever since the 20's, the issue of a "national dog", a representative breed for Romania, has been under debate. During that same period some kennel clubs are founded such as: The Society for Improving the Canine Breed in Romania and The Owners of Pedigree Dogs Association in Romania, which had amongst their purposes choosing the national dog. In order to do this, the first of the two, militated in 1928 by means of contests, advertisements, succeeding in getting if not decisive results, then in arousing, at least for the time being, the interest of the public, but especially that of the breeders -owners for the Romanian Carpathian Shepherd dog, as Dr. G Radulescu - Calafat mentions in the Vet Sciences Magazine ( Revista Stiintelor Veterinare), no2/February 1934.

Consequently, in 1931 the National Livestock Institute sets as one of its goals creating "our national shepherd dog".

All these attempts of defining a type of representative dog for the Romanian nation, end up in the publication of the first Standard project for the Romanian Shepherd dog in the Vet Sciences Magazine in 1934 under the signature of Dr G Radulescu- Calafat along with the photograph of a model dog which had been awarded the first prize at the Canine Exhibition in 1931. 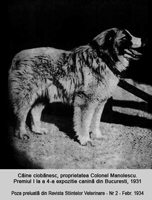 I shall quote some preliminary standard related sentences: " Our Romanian Shepherd dog……is known to be a special type, a breed of our own, which has to get as soon as possible the deserved appreciation, succeeding in defining, once and for all, the breed of the national Shepherd dog. Recently, the National Livestock Institute has passed from initiation to decision, which makes us hope that soon we shall have an irrevocable and final breed."